Shelley Sacks is an interdisciplinary artist and social sculpture practitioner who writes, teaches, performs and works across many disciplines to facilitate creative exchanges that empower people and lead to new ways of seeing and shaping our lives and the world around us.

Since 1970 she has worked between South Africa, Germany and, since 1990, in the UK, exploring new forms of art and their relationship to the struggle for a sustainable and democratic society. 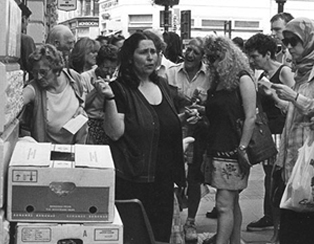 Her work includes more than fifty live actions, site works, lecture-performances, transactions and social sculpture processes including Heat Generators, The Bakery Tapes and The Third Way Social Model (1978); Mound: Re-thinking the Paradigm of Dominion (1992) a 3-month long process in a city in England); Thought Banks for the Edinburgh Festival 1994 and 1995; Exchange Values -Images of Invisible Lives (1996 – 2006) and Exchange Values -On the Table 92007 ongoing); Landing Strip for Souls [2000 -2003] a lecture-action; Ort des Treffens, Hanover, Germany (2009-10 ongoing as Citizen’s Initiative) exploring the links between reflection and active citizenship; Frametalks (2011 ongoing) and the international network project, University of the Trees (2006 ongoing) which includes Field of Commitment, Agents of Change and Earth Forum (developed the the Climate Summit actions in South Africa, 2011).

Recent co-authored publications include Die rote Blume (2013) and ATLAS of the Poetic Continent: Pathways to Ecological Citizenship (2013). She lectures and runs social sculpture processes in many parts of the world. See other selected publications.

She has also been involved in grass roots cultural and political organisations; education for democracy programmes; facilitating cooperatives in the 1970s and 1980s in South Africa; and collaborating with Joseph Beuys for more than a decade in the Free International University.


© 2022 All texts, images and processes are copyright to Shelley Sacks

If quoting please include URL and "Exchange Values on the Table, formerly known as 'Exchange Values: Images of Invisible Lives' is a social sculpture developed by Shelley Sacks in collaboration with banana producers in the Windward Islands. [1996 ongoing] "